The non-profit Spitex from Switzerland introduced a new brand strategy in 2017. For the first time, the association of around 570 non-profit Spitex organisations in Switzerland will have a common and uniform brand identity. The new Spitex brand will be used throughout Switzerland and is the result of a consistent rebranding with a modernization and reinterpretation of the well-known Spitex logo.

In a two-year strategy process, market analyses, benchmarks and surveys were carried out, which revealed that Spitex and its logo are very well known in German-speaking Switzerland. The situation is different in French-speaking Switzerland and Ticino, where Spitex services are integrated into the social medical centres and do not appear as Spitex. The new brand identity of the Spitex Association and its members takes these peculiarities into account by consistently placing the common brand at the centre of the identity as a connecting element. The Cantons of Western Switzerland and Ticino will nevertheless retain their regional names for their social medical centres.

Support in the strategy process and logo development

The uniform external appearance enables a clear positioning of non-profit Spitex vis-à-vis private Spitex providers. In this way, non-profit Spitex underlines its market leadership and wants to anchor its strengths more firmly in the public eye.

The new brand identity will be introduced on a rolling basis in the various member organisations of Spitex. Life Science Communication accompanied the Swiss Spitex Association and its members in the strategy process and conducted numerous workshops for this purpose. In several rounds, the redesign was developed and the new nationwide claim «Everywhere for all» developed, which sums up the USPs of non-profit Spitex. 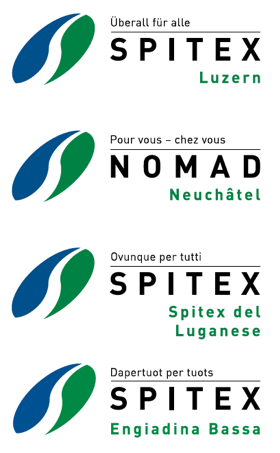